We are introducing Spanish to our kids this year in our home school. In addition to our Interactive Spanish Learning Folder, we are using these Spanish Alphabet Cards to create a foundation for the basics.

I started off with a Spanish curriculum, (Cherrydale Press) but found it a bit cumbersome for my little people. We still work on a phrase each week from this curriculum, but the majority of what they are retaining seems to come more of the songs and interactive games that we play.

Our Spanish lessons are super short (5 minutes or under) but we try to do something everyday. It doesn’t sound like much, but it really does add up! I’ve been pleased with our progress.

The two tools that have been very helpful to get us started have been: a set of Spanish alphabet cards and an alphabet chart with the pronunciation. These along with a few other resources (which I talk about below) we have been able to teach our kids some of the basics.

Ways to Use the Spanish Alphabet Cards

You can use the Spanish alphabet cards any way you want. Our kids are still quite little, so we use them to create games and sing songs as a way to easily memorize and learn the letters.

Here are some different ways we like to use these cards to teach the Spanish alphabet sounds.

This is a great resource to reference if you are teaching your kids Spanish. Not only does it help teach the sounds to the kids, but also helps the parent if they are not fluent.  Because a lot of the time, we are learning right along with our kids!

Here are some different ways we like to use this chart to teach the Spanish alphabet sounds.

These are print and go, but if you want to make them more durable I recommend laminating them. (Another option would be to print them on a heavy cardstock.)

In order to laminate you need:

If you want these Spanish Alphabet Cards and Charts for your homeschool or classroom you can get the download HERE.

Note: This chart includes the four extra letters in the Spanish alphabet which are CH, LL, ñ, rr

Learn Spanish With Your Kids

In our homeschool we value other languages and aim to teach the basics to our kids. Is it possible if we don’t fluently speak the languages? For the basics, yes.

We learn right along with our kids.

For the basics, we seek to cover the alphabet, counting, and simple vocabulary. Furthermore, all of these can be accomplished through printable resources, as well as, helpful language-learning websites like Duolingo, PBS kids, or OnlineFreeSpanish.

However, if you plan on going deeper and striving for fluency, I would recommend a full program like Rosetta Stone or Speekee.  Finding a fluent tutor would also be very beneficial.

If you wanting to teach your kids the Spanish alphabet but are worried you will get the pronunciation wrong. You are not alone.

You can simply use the chart that has the pronunciation included on it. As well as, refresh your knowledge with this quick tutorial: How to Say the Letters and Sounds in Spanish.

What are some of your favorite ways to teach Spanish to Pre-K/Kindergarten aged kids?

Today I’m sharing some of our favorite screen-free activities. My kids are getting to the age that I’m trying to get them to engage in more independent activities (even if it is only for a few minutes). My goal is not to entertain them but to prompt them to creativity and independence.

Its September! Time for visiting pumpkin patches and making pumpkin pie. Today I’m sharing a list of pumpkin-related activities you can do with your kids. These ideas would be great for building a pumpkin-themed unit study for your homeschool or classroom OR for planning a few fun pumpkin themed activities for the season. Here we… 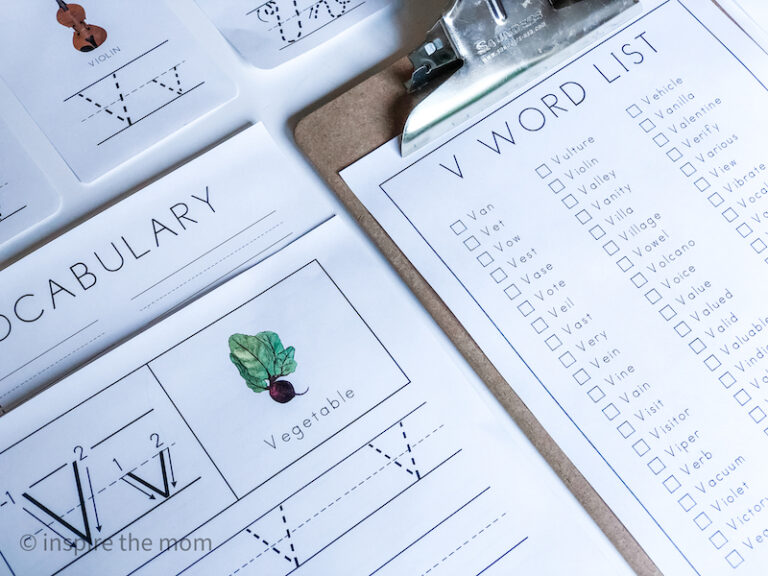 If you are looking for some v words for kids, you’ve come to the right place! Because we are going to dive into a ton of options for you to use with your preschoolers all the way up to your elementary aged kids. But before we get started, let’s go over the sound that v…

These dot and dab activities are another fun, colorful way to teach the alphabet. Using bingo dabbers, kids can easily learn to recognize their letters.

Whether you are doing a unit about seasons or are simply wanting to read some short stories about winter, today I’m going to share some of our favorite picture books about winter. From frosty cold temperatures and snow days to winter animals and owling, I’ve got a list of wonderful winter books you can read…